Originally meaning “giant step”, as legend has it that Tai Po was once a place with forest and animals that pose a danger to public safety. It was named so to bring good luck and dispel misfortunes. As Hong Kong developed to become a prominent trading port, it was renamed as “Tai Po (Po that means harbor in Chinese character)”. Nowadays, Tai Po has become one of the new towns of New Territories East. This featured route will begin from Tai Po Waterfront Park and end at Hong Kong Railway Museum.

As you hop off from the bus at Fu Shin Estate, cross Yuen Shin Road and you will arrive at Tai Po Waterfront Park. The park spans over an area of 22 hectares and costs more than HK$200 million in construction. It is the largest park of the Leisure and Cultural Services Department.

Standing in the center of the park is Spiral Lookout Tower, located where the British troops landed when the British took over the New Territories back then. It is the commemoration of the transfer of sovereignty of Hong Kong to China. Wheelchair visitors in wheelchairs can easily access to the top of the tower through the ramp, where you can enjoy the view of whole park as well as the magnificent view of Pat Sin Leng and Ma On Shan.

After visiting the Mega Mall, head along Po Heung Street and cross Lam Tsuen River turn into Po Yick Street and make another turn at Tsin Yuen Street. Once you arrived at On Fu Road, ascend from the left, and you will see the ramp entrance of Hong Kong Railway Museum at the end of the street, while the staircase is located at Shung Tak Street. Hong Kong Railway Museum is housed in the former Tai Po Market Railway Station. Erected in 1913, it used to be an important station of Kowloon-Canton Railway. After the introduction of modernization train during the 1980s by Kowloon-Canton Railway, the station was replaced by New Tai Po Market Station in 1983. The old station was shut down at the same year. It was declared a monument, the site together with the buildings and relevant exhibits were refurbished and transformed in a museum. There are six carriages on the tracks, one pump trolley and a diesel-engine railcar are open to the public. Tools, train models, historical descriptions and signal systems are also on display for train enthusiasts. 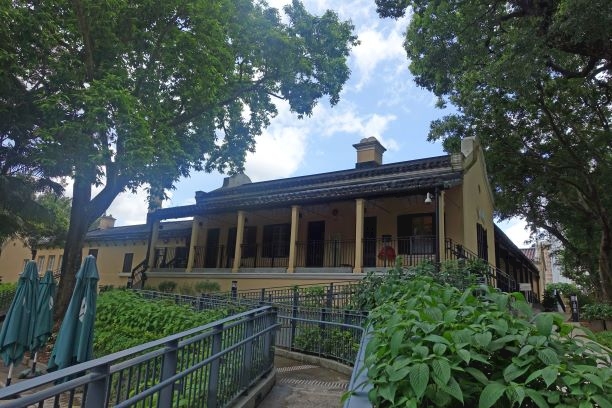 Built in 1899, Green Hub is housed in former Tai Po Police Station and listed as Grade 1 Historic Building. The historical architecture complex of the old police department was refurbished under the “Revitalising Historic Buildings Through Partnership Scheme” in 2010 to demonstrate sustainable ways of living. There are Heritage Display and Trail in Green Hub. The exhibition allows visitors to have a better understanding of the architectural integrity and history of the Old Tai Po Police Station. The Heritage Trail allows visitors to connect the significant historical, architectural and ecological features of the historical building. Visitors can also enjoy the healthy cuisine made with local ingredients at the low-carbon restaurant Eat Well Canteen after a heritage and architectural tour.

Short comment: Green Hub is generally a wheelchair-friendly place except for some exhibition areas such as retention cell have door sills and which wheelchairs users can only take a look from the entrance. The best way of visiting Green Hub is by MTR. Hop off at Tai Po Station and exit through Exit A2, cross the pedestrian tunnels on the right, head upwards along Wan Tau Kok Playground and arrive Green Hub through Wan Tau Kok Lane. Wheelchair users can head straight after exiting Exit A2, turn right on Nam Wan Road, and turn into Wan Tau Kok Lane through the ramp at Wan Tau Kok Road Sitting-out Area, then you will arrive Green Hub. Either way, wheelchair users need to cross long and big ramps, which may require others’ assistance. There is no visitor parking space at Green Hub. There is just one parking space for disabilities which requires advance booking.

Parking Spaces Designated for the Disabled